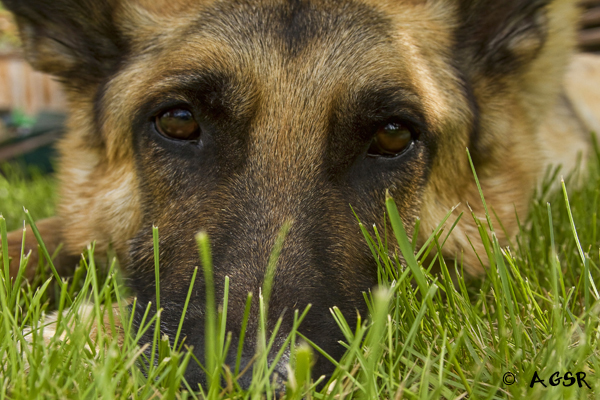 About Bones and why the rescue was started...

Bones was an abused, neglected and starved 3 year old German Shepherd was picked up along the side of the road on a 40 F below November day in Fairbanks Alaska. He was what most people would call a throw away dog, except for me. When I met Bones, he was 40 pounds underweight, dirty and scared. As our eyes met, I saw a dog who had lost all hope - his eyes were empty and his body listless. I told the kennel worker to pull him because I wanted him. I learned after our first vet appointment that Bones had other serious medical issues. X-rays showed both hips had severe hip dysplasia and surgery was needed as soon as possible. On May 3, 2006, Dr. Stuve performed a bilateral femoral head ostectomy (FHO) surgery on Bones - something the surgeon only did in extreme cases. The surgeon told me Bones would need assistance to walk for the next few weeks. The second day of recovery, I called the clinic and asked for something to help Bones relax because all he wanted to do was walk around and go down stairs on his own. I was amazed to see his willpower. Bones never showed any kind of weakness; something only a dog who had to fight all his life to protect himself would do. Two months after the surgery Bones and I took a little road trip to enjoy the warmth of the sun. That afternoon we sat together and watched a gold panner in search of the mother load off from the Steese HWY. We were very content to just be in each other’s company.

Through the years Bones became the dog that would always greet the new rescue who came through our doors. No matter their age, old or sick, he would show them love. He would even allow the puppies to pull on his ears. It's as if he knew these dogs needed to know that they would be okay. In March of 2011, Bones was diagnosed with cancer - lymphoma. I was told he only had a few months to live so I decided not to do the chemo treatments. I believe in the quality of life and not the quantity and I did not want to take the chance of killing him with chemo in the hope of sharing another few months of life. As always, I made his life as comfortable as possible. We used the water treadmill for his hips and medication for pain. On June 7, 2011, one of the photos from our special time together, watching the gold panner, sold through Getty Images and it was to be used for a book cover. And not for just any book, but one about another wonderful rescued German Shepherd: Rin Tin Tin. Three days later, on June 10, 2011, Bones died in my arms on his own terms and where he loved to be the most, in the kitchen.

Bones let me see first-hand the power of forgiveness and the ability to press through and onward even in the worst of times. Bones is the foundation dog of the Arctic German Shepherd Rescue and the one I feel when he leads me to another dog in need. He reminds me to keep going forward in life and to never give up. The photo of Bones taken on his last day greets all of the new rescues who walk through the front door of Arctic German Shepherd Rescue and it is under this photo that the new rescues find comfort and rest. Thank you, Bones, for sharing your life with mine.